The Golden Notebook | Doris Lessing
BUY BOOK
Recommended by Tess Edmonson
“Anna Wulf, Lessing’s protagonist, maintains four differently colored journals: red for her political activity in the British Communist Party; blue for her dreams, feelings, and psychoanalysis; black for her portrayal of young adulthood in colonized Southern Rhodesia; yellow for a novelized account of a failed love affair. The powerful fantasy of an unintegrated life—a life where work, sex, writing, children, political organizing, and friendships can be independently managed and maintained—brings Anna close to total psychic dissolution.”
About the Book
Anna is a writer, author of one very successful novel, who now keeps four notebooks. In one, with a black cover, she reviews the African experience of her earlier years. In a red one she records her political life, her disillusionment with communism. In a yellow one she writes a novel in which the heroine relives part of her own experience. And in a blue one she keeps a personal diary. Finally, in love with an American writer and threatened with insanity, Anna resolves to bring the threads of all four books together in a golden notebook. Lessing's best-known and most influential novel, The Golden Notebook retains its extraordinary power and relevance decades after its initial publication. 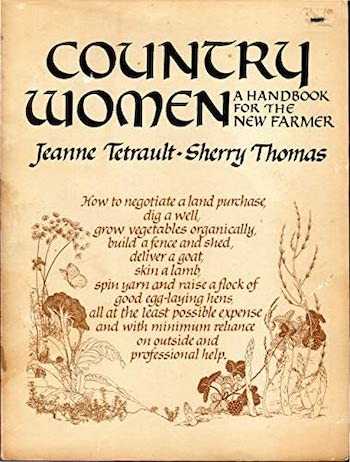 Country Women: A Handbook for the New Farmer | Sherry Thomas & Jeanne Tetrault
BUY BOOK
Recommended by Sarah Resnick
“Country Women was published in 1975, at the height of the commune movement in the United States. With beautiful illustrations by Leona Walden, this handbook for the end of the world tells you how to: speed compost, castrate sheep, trim hooves, attend to a goat’s prolapse (!), use a two-women saw, negotiate a land purchase, dig a well, build a fence, skin a lamb, and raise a flock of egg-laying hens, ‘all at the least possible expense and with minimum reliance on outside and professional help.’ At once an artifact for a bygone era and a blueprint for the future.”
About the Book
This classic reference, which has informed two generations of women, is taken from the original homesteading publication Country Women. Written from the perspective of women learning and sharing all manner of farming knowledge on a small scale, it remains an invaluable guide. Encouragement and practical information infuse the reader with a deep respect for the land and personal journal entries throughout inspire a sense of self-sufficiency rooted in the earth. Born of the "back to the land" movement, this handbook chronicles the aspirations of tireless women seeking a new life on small farms around America. Authors Jeanne Tetrault and Sherry Thomas lived this philosophy and lifestyle as they eventually networked with like-minded women to share ideas, stories, and knowledge.

The Orchid Thief | Susan Orlean
BUY BOOK
Recommended by Nicole Lipman
“Who knew flowers could be so thrilling?! Maybe you’ve seen Adaptation but never read the source text. Almost miraculously, the true John Laroche story is just as bizarre and electrifying as Charlie Kaufman’s fictionalized version.”
About the Book
A modern classic of personal journalism, The Orchid Thief is Susan Orlean’s wickedly funny, elegant, and captivating tale of an amazing obsession. Determined to clone an endangered flower—the rare ghost orchid Polyrrhiza lindenii—a deeply eccentric and oddly attractive man named John Laroche leads Orlean on an unforgettable tour of America’s strange flower-selling subculture, through Florida’s swamps and beyond, along with the Seminoles who help him and the forces of justice who fight him. In the end, Orlean—and the reader—will have more respect for underdog determination and a powerful new definition of passion. 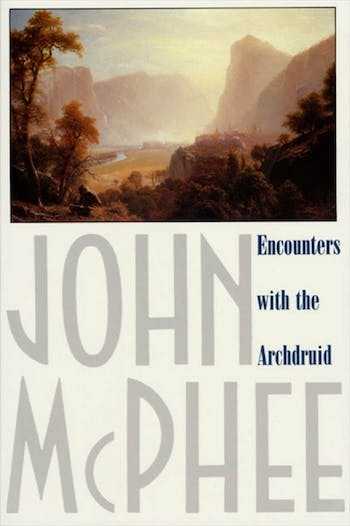 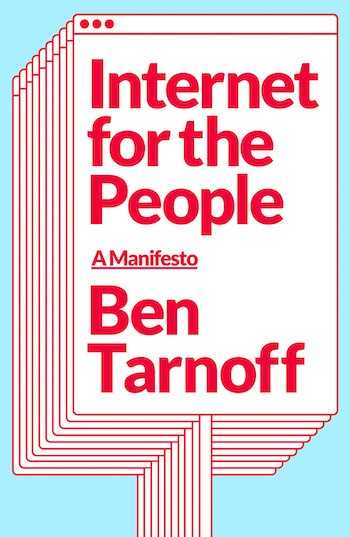 Internet for the People | Ben Tarnoff
BUY BOOK
Recommended by Max Read
“This is a remarkable book that manages to be—simultaneously—a concise history of the internet, an engaging explanation of how it works (on both a technical and a political level), and a thought-provoking argument about what needs to be done for it to fulfill its promise. All in only a couple hundred pages, to boot!”
About the Book
In Internet for the People, leading tech writer Ben Tarnoff offers an answer. The internet is broken, he argues, because it is owned by private firms and run for profit. Google annihilates your privacy and Facebook amplifies right-wing propaganda because it is profitable to do so. But the internet wasn't always like this—it had to be remade for the purposes of profit maximization, through a years-long process of privatization that turned a small research network into a powerhouse of global capitalism. Tarnoff tells the story of the privatization that made the modern internet, and which set in motion the crises that consume it today. 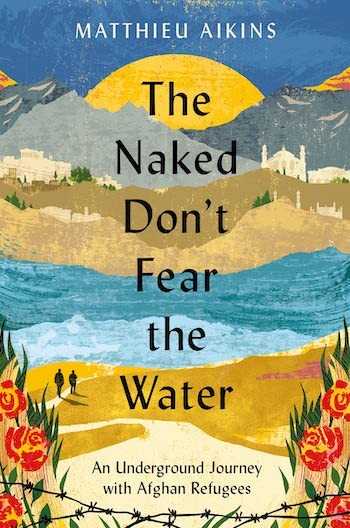 The Naked Don't Fear the Water | Matthieu Aikins
BUY BOOK
Recommended by Hari Kunzru
“This is an extraordinary narrative that took serious bravery to write. The author, a war correspondent, goes undercover to acompany his Afghan friend and former translator along the smuggler’s road from Afghanistan to Europe.”
About the Book
In 2016, a young Afghan driver and translator named Omar makes the heart-wrenching choice to flee his war-torn country, saying goodbye to Laila, the love of his life, without knowing when they might be reunited again. He is one of millions of refugees who leave their homes that year. Matthieu Aikins, a journalist living in Kabul, decides to follow his friend. In order to do so, he must leave his own passport and identity behind to go underground on the refugee trail with Omar. Their odyssey across land and sea from Afghanistan to Europe brings them face to face with the people at heart of the migration crisis: smugglers, cops, activists, and the men, women and children fleeing war in search of a better life. As setbacks and dangers mount for the two friends, Matthieu is also drawn into the escape plans of Omar's entire family, including Maryam, the matriarch who has fought ferociously for her children's survival. 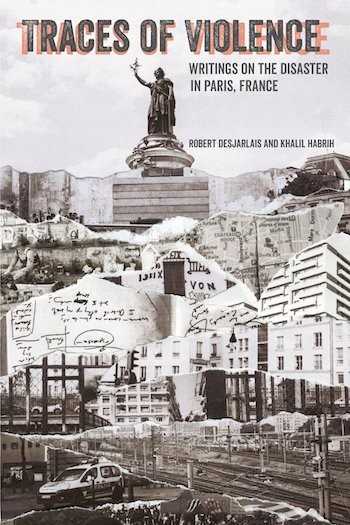 Traces of Violence: Writings on the Disaster in Paris, France | Robert R. Desjarlais & Khalil Habrih
BUY BOOK
Recommended by Elias Rodriques
“A dialogic account of policing in Paris after the disaster, haunting in its prose, life affirming in its commitment to collaboration.”
About the Book
In this highly original work, Robert Desjarlais and Khalil Habrih present a dialogic account of the lingering effects of the terroristic attacks that occurred in Paris in November 2015. Situating the events within broader histories of state violence in metropolitan France and its colonial geographies, the authors interweave narrative accounts and photographs to explore a range of related phenomena: governmental and journalistic discourses on terrorism, the political work of archives, police and military apparatuses of control and anti-terror deterrence, the histories of wounds, and the haunting reverberations of violence in a plurality of lives and deaths. Traces of Violence is a moving work that aids our understanding of the afterlife of violence and offers an innovative example of collaborative writing across anthropology and sociology. 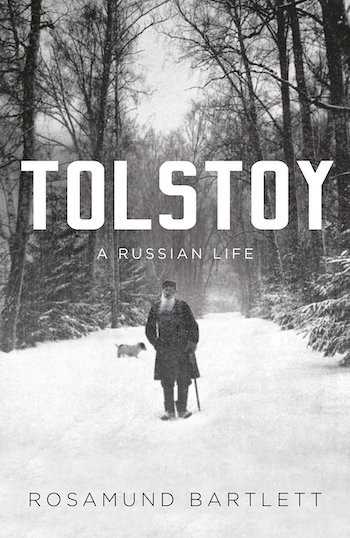 Tolstoy: A Russian Life | Rosamund Bartlett
BUY BOOK
Recommended by Dayna Tortorici
“Consider this an important entry in ‘you think you know, but you have no idea.’ Yes, you are familiar with Tolstoy the giant of Russian literature—but did you know about Tolstoy the inveterate gambler who fathered 13 children? Or Tolstoy the educational reformer who opened a school for peasants and created a reading primer, the multi-volume ABC, for which he retranslated all of Aesop's fables? Or Tolstoy the famine-relief champion who compiled and published some of the earliest census data about peasants? Or Tolstoy the sectarian religious thinker, whose philosophy of nonviolence would later influence Gandhi, Wittgenstein, and Martin Luther King Jr.? This prickly, sensitive, outrageously talented dude lived through one of the most fascinating periods of Russian history, and his life intersected with that history in often remarkable ways. A wonderful book for biography lovers, especially if you've recently read (or reread) his fiction and wondered how on earth he did it.”
About the Book
In this, the first biography of Tolstoy in more than twenty years, Rosamund Bartlett draws extensively on key Russian sources, including much fascinating material made available since the collapse of the Soviet Union. She sheds light on Tolstoy’s remarkable journey from callow youth to writer to prophet; discusses his troubled relationship with his wife, Sonya; and vividly evokes the Russian landscapes Tolstoy so loved and the turbulent times in which he lived. Above all, Bartett gives us an eloquent portrait of the brilliant, maddening, and contrary man who has once again been discovered by a new generation of readers. 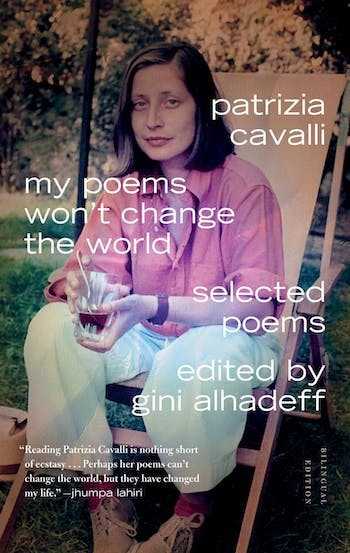 My Poems Won't Change the World | Patrizia Cavalli
BUY BOOK
Recommended by Clare Fentress
“Patrizia Cavalli's poems are about nothing less than the fullness of life, in all of its impossibilities, absurdities, and, yes, occasional joys. They revel in surprise without being naive, somehow maintaining a looseness that yields not flaccidity but sharpened perception. I feel a jolt every time I read them.”
About the Book
Any hall she has ever read her poetry in is invariably filled to the gills. Women like her, girls like her, and men like her, too. In Italy, Patrizia Cavalli is as beloved as Wistawa Szymborska is in Poland, and if Italy were Japan she'd be designated a national treasure. The Italian philosopher Giorgio Agamben said of Cavalli that she has written the most intensely ‘ethical’ poetry in Italian literature of the twentieth century. One could add that it is, easily, also the most sensual and comical. Though Cavalli has been widely translated into German, French, and Spanish, My Poems Won't Change the World is her first substantial American anthology. 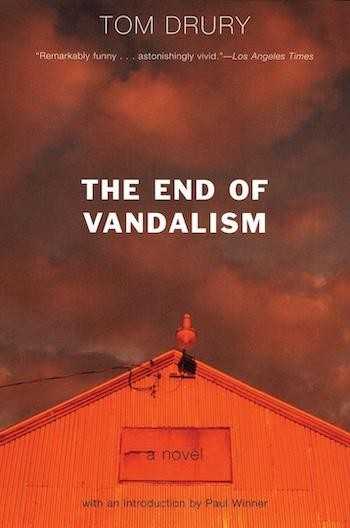 The End of Vandalism | Tom Drury
BUY BOOK
Recommended by Lisa Borst
“It’s hard to succinctly describe the humane and low-key charm of The End of Vandalism, but here’s the moment where the novel really took flight for me: ‘When Albert was five or six years old, he got mad at Claude and Marietta and decided to move out to the woods behind the Robeshaw farm. He took a can of beans, a can opener, a fork, and [a book] . . . He read the whole thing and then he was hungry, and he managed to open the can and begin eating the beans. But when he came upon the little cube of pork in the beans, he didn't know what it was, and it scared him, and he ran crying for home.’”
About the Book
Welcome to Grouse County—a fictional Midwest that is at once familiar and amusingly eccentric—where a thief vacuums the church before stealing the chalice, a lonely woman paints her toenails in a drafty farmhouse, and a sleepless man watches his restless bride scatter their bills beneath the stars. At the heart of The End of Vandalism is an unforgettable love triangle set off by a crime: Sheriff Dan Norman arrests Tiny Darling for vandalizing an anti-vandalism dance and then marries the culprit's ex-wife Louise. So Tiny loses Louise, Louise loses her sense of self, and the three find themselves on an epic journey.
At turns hilarious and heart-breaking, The End of Vandalism is a radiant novel about the beauty and ache of modern life.
Make a Quiz
It's free to start.
Powered by: Quiz Maker